Hop on the red Ferrari, take a beautiful babe with you and enjoy the view as we drive along memory lane and remember OutRun, a true SEGA classic and October's Game of the Month, as chosen by you.

OutRun was released in 1986 and created by Yu Suzuki. But, the person who is now considered a gaming legend, the father of so many arcade classics, was but a freshman at SEGA at the time.

Suzuki-san got his inspiration from American cinema, namely from "The Cannonball Run", a film starring Burt Reynolds. Although, initially, OutRun was supposed to feature scenery from all over the US, Suzuki changed his mind and included European sights in order to feature more variety in the game.

The man did the research himself by doing a road trip and driving around Monaco, Switzerland, Milan, Rome, etc. Some people have really tough jobs, right?

OutRun was originally released for the Arcades in 1986, and had you controlling a Ferrari Testarossa, one of the most-desired machines at the time, with a beautiful woman by your side all the while enjoying the view.

It was the first racing game to feature non-linear gameplay. At the end of each stage, the player had to choose between going left (easier route) or right (harder).

Versions of OutRun were later released for the Master System in 1987, the Mega Drive/Genesis in 1991 and the Game Gear also in 1991. The handheld 8-bit version even featured a versus mode where you could play against a friend or the CPU. The game was also ported to non-SEGA consoles, such as the Commodore 64, the ZX Spectrum and the TurbografX 16.

Another highlight of OutRun, besides it's amazing graphics and constantly changing backgrounds reminiscent of real life locations, was the music. Remember the different radio stations you could listen to on Metropolis Street Racer, or even the GTA series? OutRun did that first, by letting you choose the soundtrack to the game, like they were radio stations. To this day, very few gamers don't recognise "Splash Wave" or "Magical Sound Shower" when they hear them.

The original OutRun was so successful it spanned quite a few sequels, such as Turbo OutRun and OutRunners, for the Mega Drive/Genesis, arcade sequels and, most recently, OutRun 2006 Coast 2 Coast for the PS2, PSP and Xbox and OutRun Online Arcade for the PS3 and Xbox 360.

In short, OutRun is still a great game today, and one that most SEGA fans treasure in their hearts. Proof of that, was the recent inclusion of the OutRun Bay track in Sonic & All-Stars Racing Transformed, or the arcade cabinet hologram in the Race of Ages track.

If you haven't played yet, you owe it to yourself to try this piece of SEGA and video game history. Did you know it won the Golden Joystick Awards for Game of the Year in 1987? 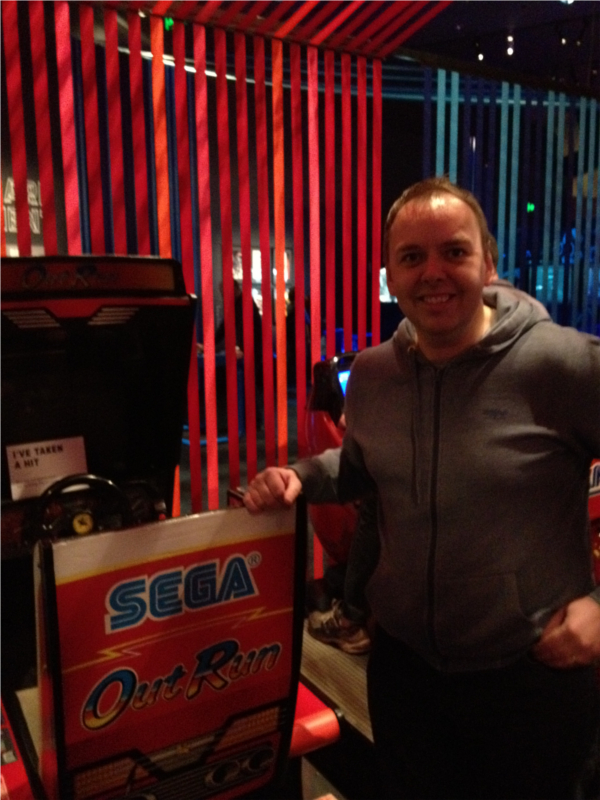 "OutRun is my favourite game of all time. The first time I played it was probably on holiday in Wales or Blackpool. I was 13 when it hit the arcades and the Deluxe cabinet was the greatest arcade experience at the time.

What else makes OutRun so special to me? The graphics and sprite scaling looked amazing and it still holds up today as a good looking game. Some features had never been seen before like being able to change the music track and having to choose which route to take.

OutRun is SEGA to me... bright colours, blue skies and white fluffy clouds, palm trees... It takes you to happy places and great memories! If you want to know more about OutRun, drop by my OutRun86 blog some time, there's a lot to discover about this great game."

OutRun is truly one special game. But also special is the soundtrack and the many remixes and variants of it that were produced over the years. So, what better way to celebrate that than our own Game of the Month Show? Join me on Monday, October 21st, at 8pm (UK) while I dedicate a whole hour to the music of OutRun and your own (and mine) commentaries and memories. More details on how you can take part of the show in an upcoming show blog post.