Do Sonic's new parkour abilities enable him to run through this new 3DS title unscathed? Or is Dimps' new attempt at making a Sonic game a huge fall into a bottomless pit? 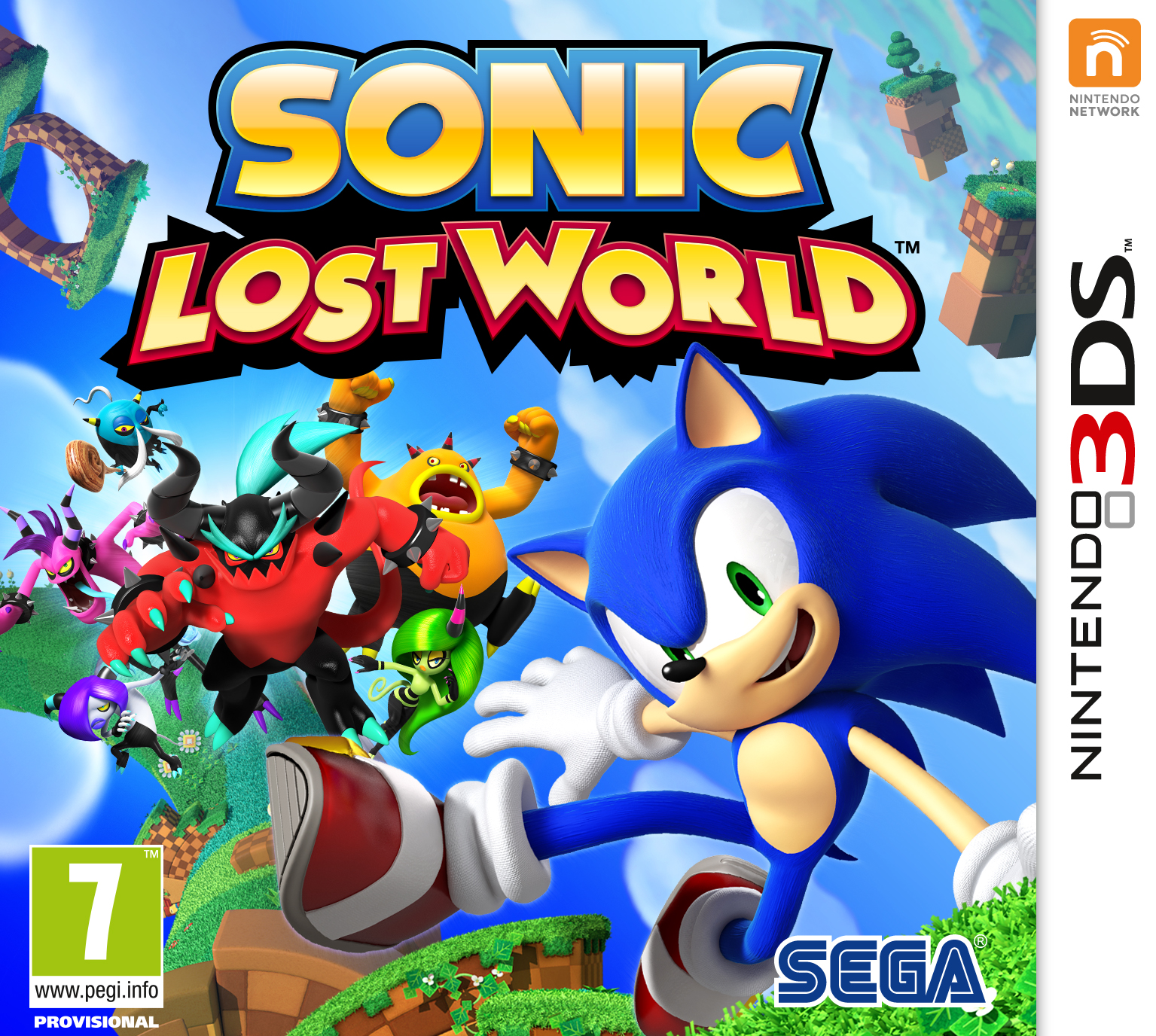 Every time a new Sonic game is announced nowadays, fan reactions range from not caring a bit because they’ve been disappointed in the past, to getting seriously hyped, to a mix between the two. Sonic Lost World on the 3DS had a few new ingredients to spice up the controversy: it would be the first full 3D Sonic game on a handheld; it wouldn’t be a port of the Wii U game, but feature a completely different level design on the same story… and it would be developed by Dimps, once again!

Let’s be honest, aside from both Rush games and probably the Advance games, Dimps’ record working on the Sonic series isn’t the best. Colours on the DS and Generations on the 3DS come to mind as good examples of that. And Sonic the Hedgehog 4 got mixed reviews from fans and critics alike.

So, to get that out of the way, let me start by saying Dimps did a good job on Sonic Lost World. The handheld version isn’t as polished and as fun to play as its Wii U relative, but it’s the best Sonic game on a handheld in a long time. That can’t be bad! 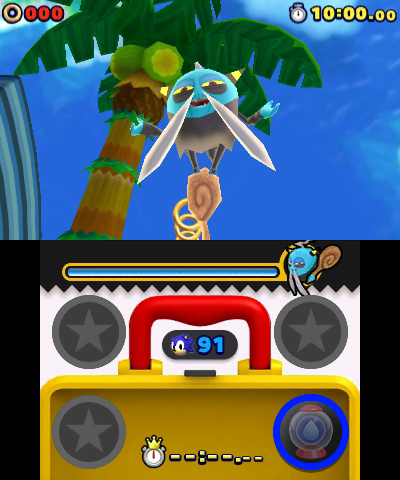 In case you’ve been living under a rock, let’s just sum up the storyline for you. Sonic and Tails crash land on a strange world called The Lost Hex, inhabited by six deadly monsters called Zeti. They’re being controlled by Eggman at first, but after a few stages have been cleared, they turn against our favourite mad scientist, and Sonic and the Doctor have to team up to eliminate the threat. Not exactly memorable, but, quite frankly, no Sonic game ever had a stellar storyline, right? Anyway, we’re here for the gameplay, not the story! 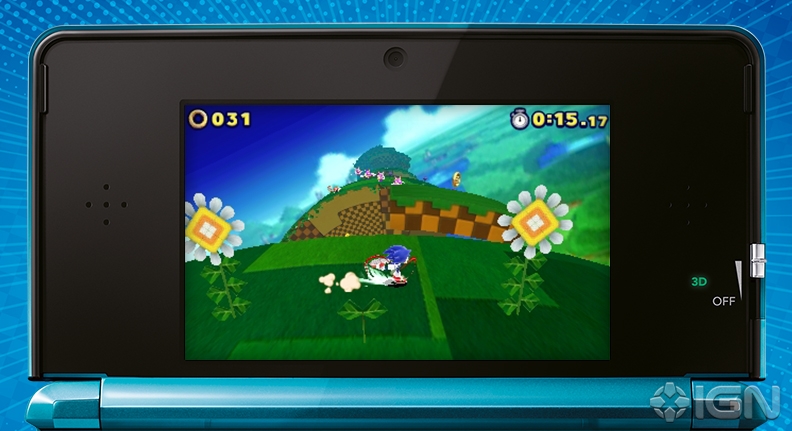 Sonic Lost World is a pretty game on the 3DS. They even squeezed some of the cutscenes from the Wii U version on the handheld and, even if they’re really compressed and not as amazing as on the home console, they’re interesting to watch.

Of course, the best part visually are the worlds you run across. From lush green hill-like tubular planetoids to frozen snowboarding lanes, and even arid deserts, playing Sonic Lost World is a feast for the eyes.

I’m writing this and thinking about how disappointed I was when I played Colours on my DS the first time. Graphically, it wasn’t brilliant. Lost World doesn’t look like a Dimps game. And I mean this in a good way.

The music is spot on. The soundtrack is almost entirely the same as the one found on the Wii U game, although noticeably compressed. And this is an awesome thing because it’s a brilliant soundtrack. Kudos to Tomoya Ohtani for the excellent work. I can’t wait to get a hold of the soundtrack and play some of these tunes on RadioSEGA! 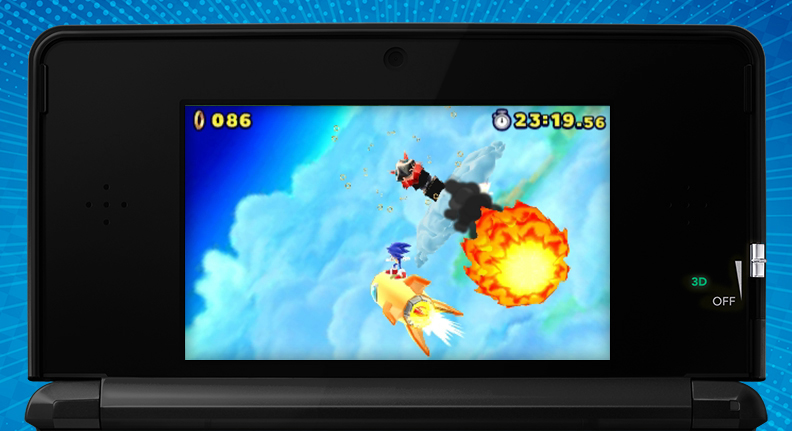 Now for the most important part: the gameplay. How does Sonic Lost World hold up? Well, it’s great… and it’s terrible at the same time.

For one, some of the levels are brilliantly designed and feature some well thought out ways to use the wisps. Some levels even feature similar high-speed sections to the ones found in the Wii U game. And the Frozen Factory world features snowboarding. Win!

Sonic, of course, just like on the Wii U game, moves slower this time, which is nice, although he moves a bit faster on the handheld game. If you want the blue hedgehog to run, though, just press the R trigger and off you go! The L trigger is not used for spin dashing but to adjust your camera in certain areas. You can still spin dash, however, by pressing X/Y, just like you do to bounce.

Parkour is also very much present here and even more than on the Wii U. Parkour moves make for a very nice change in gameplay style and they sometimes avoid slowing down the action or even certain death. The handheld version even allows you to boost when parkouring (is this a word?) by pressing X/Y to keep your momentum.

Wisps are also more abundant in Lost World 3DS. This time, you’ll unlock more of them as you play along and that means you’ll be able to come back to previously completed stages and replay them accessing new areas with new colour powers. Some of the wisps are really nice to use, like the newly added Indigo Asteroid.

Boss fights here present more of a challenge which is nice, compared to the ridiculously easy battles you have to go through on the Wii U game. In fact, the game features proper boss battles instead that require a decent amount of hits, not weak Zeti killed by two or three hits. 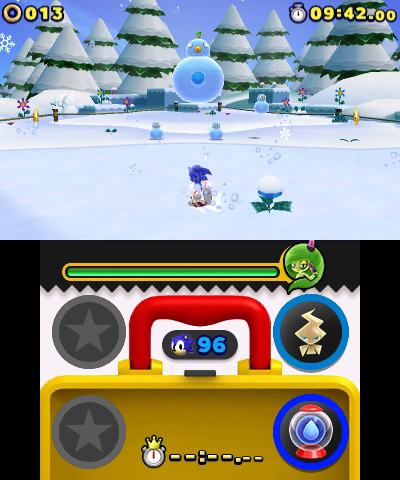 On the other hand, though, some of the stages feature unnecessary puzzle mechanics that make getting through the entire level feel like a boring chore. The amount of times you’ll need to find and press a certain number of switches or roll some snowballs in place in order to unlock a spring to get you to the next area is ridiculous.

The Special Stages are new. No more half-pipes or rolling around at the speed of sound in crazy mazes. This time, we have to use Nintendo 3DS’s built-in gyro sensors. Don’t get me wrong, it’s nice that Dimps went with a new way of getting Chaos Emeralds, it really is. But the special stages are annoying. You have to move around your room, console in hand, while trying to grab all the coloured spheres in time.

Why is this not that great? First of all, you’ll get dizzy. Second of all, you’ll get tired. And you’re playing a platformer after all, not Wii Fit! This new gimmick might appeal to some of you, I’m sure, but with so many motion-based games on the iPhone done well, I can’t see the point in these special stages. I guess one can argue they make for a nice breather from the main game, but I’d disagree. The same could be said for the Gray Quake wisp, the one that has you, again, holding your 3DS and tilting it to control Sonic. 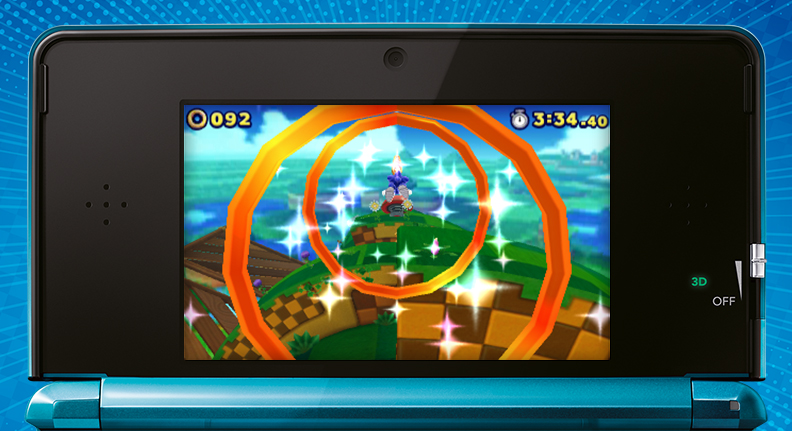 Also, the final world makes Dimps seem a bit lazy when compared to the Wii U version. Instead of running through new stages and fighting bosses at the end, on the handheld game you just fight the Deadly Six in succession. Lame…

Overall, though, make no mistake: both the Wii U and the 3DS versions of Sonic Lost World were the most fun I’ve had with a Sonic game in a long time. Sure, the Wii U version is better in all senses, but Dimps were able to make a nice handheld title to honour Sonic’s legacy and almost, almost make us forget the recent flops that were Colours and Generations.

+ Fun platformer that is really good when is at its best.

+ Some colour powers are brilliantly implemented.

- Frustrating at times with all the puzzle mechanics.

- The story isn’t exactly memorable, although funny at times.