Zone: 0 is a different kind of Sonic fansite. Its owner is now preparing the guide for Sonic 3 & Knuckles,  set to be up on August 30th. Who is LiQuidShade, though? Read on. 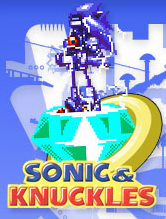 RS: Which game did you lock-on to S&K the most?
LS: Sonic 3, although I've clocked up a fair few hours on Blue Sphere too. My friends and I were baffled that it just never seemed to end!
RS: Will this be your final guide? Or can we expect more in the future?
LS: This will be my final guide. I had originally hoped to one day write a guide for every game in the series, no matter how long it took, but not only is that going to take me much longer than I originally thought, I just can't commit to that anymore I'm afraid. I have lots of ideas for other projects that I'm really excited about but they're never going to get done if I'm still slaving away on game guides, so all good things need to come to an end sometime unfortunately. I felt this was an appropriate place to leave it.
That doesn't necessarily mean the end of Zone: 0 as a site though. Though unconfirmed at the moment, I have new ideas of where I might like to take it - possibly into a system that offers a more user-generated experience. Regardless though, the guides will always have their home there, alongside any new features or content.
RS: Did you ever think about broadening the range of your guides to include other SEGA games? I'd love a Jet Set Radio or Shenmue guide! :)
LS: That would be nice, but for me Sonic comes far ahead of anything else so I'd be unlikely to do any other guide. Especially since I'm not even doing any more Sonic ones now either!
RS: If you were going to a desert island and could only take the soundtrack to one SEGA game with you, which one would it be and why?
LS: It's a bit of cop out, but probably Sonic Generations. It comprises some of the best music from the whole series, and in many cases even improves upon it. I'm totally in love with Tomoya Ohtani's takes on Rooftop Run and Crisis City, they're just sublime. I love almost all Sonic music though, so beyond that, it's an extremely hard decision indeed!
RS: We've been having a lot of talk about the new Sonic & All-Stars Transformed. Are you excited about this? Any bets on what the yet to be announced characters will be?
LS: Sure, it's pretty cool. I'm most excited about new Sonic platformers of course, but I have the original and I enjoyed it more than I thought I would. The new transforming idea sounds pretty cool. I wouldn't like to guess on anything unannounced, that would probably demonstrate my lack of knowledge on obscure SEGA characters!
RS: Finally, what other hobbies/interests do you have?
LS: I like to draw. Not as much or as frequently as resident Zone: 0 artist Ricky Earl, but enough that I'd like to do more of it in the future. I'm also a developer of flash games and applications as part of my day job, so I like to make games as well as play them.
I have a number of project ideas to go onto next, some Sonic-based, some not, but one of my dreams is to use all of the knowledge I've acquired over the years to build my own original levels, as fan-games. Hopefully I'll be able to combine both of the above hobbies in order to do that. Whatever I choose to do, I'm pretty sure you won't have heard the last of me within the Sonic community, after the end of August!
RS: Thanks for your time, LiQuidShade! It was a pleasure to have you on SEGA Fans Chronicles. We wish all the best for you and Zone: 0 in the future and we'll be checking out your Sonic & Knuckles guide in a few days!
LS: Thank you very much, it's been a great opportunity. Keep up the great work!
There you go! Be sure to check out Zone:0 and keep an eye out for the final guide by LiQuidShade on August 30th.
If you have any suggestions for future interviews, be sure to leave me a private message on the message boards. Be sure to come back next week when we write a new chapter in the SEGA Fans Chronicles.
19th August, 2012 - 01:18 GMT KC Article viewed 2342 times 0 Comments

What are your fav songs played on here?
Posted by: lanikane68