If you've seen screenshots or gameplay videos of Sonic Jump you may mistake it for another Doodle Jump/Mega Jump clone. You're wrong. Sonic Jump is a port… of sorts… of a six-years old game. But is it worth your hard-earned cents/pennies?

Developed by: SEGA Hardlight
Published by: SEGA
Released: 15 Oct 2012
Price: £0.69 (UK); $0.99 (US/Canada/Australia); €0.89 (Eurozone);
Tested on: iPhone 5 and iPad 3 both running iOS 6.1.2    Version: 1.3
Forever a clone?
If you're not into the Sonic scene that much, you probably don't know this but SEGA Hardlight's first title isn't completely original. It's actually an adaptation of a game released by SEGA Mobile in 2006. Check out the video below for gameplay and some familiar tunes (Live and Learn theme song FTW!).
So, six years later, SEGA decide to bring it back for current gen phones. Of course, this couldn't be just a simple port. Just as current phones are more than just that. We're in the age of smartphones with iOS and Android systems being more and more sophisticated as time goes by. What to do? How about putting the recently created Hardlight Studio in charge of the development of a new Jump game? And so they did.
So, there you have it. You may mistake Sonic Jump '12 to be a another clone for a Doodle Jump or Mega Jump. It's not. If anything, those games are trying to emulate the original Sonic Jump released back in 2006. (What a year for Sonic games, right? … Right?) But Sonic Jump is a good enough game on its own, no matter how similar it may seem to the aforementioned jumping titles.
Jumping through your retinas!
The great thing about the more recent SEGA outings on iOS systems is the use of Apple's Retina Display technology for the modern iDevices. Sonic Jump is a great example of that. As you start the app, you'll get a beautiful logo of Sonic jumping through a gold ring with his arms wide open and a smile on his face. If you're a Sonic fan, it'll make you get in the mood for some gaming goodness!
Graphically, the game's a beauty. Especially if you're on an iPhone 5 with it's bigger screen and more so on an iPad. Personally, I love the effect Hardlight created with the blurred out backgrounds. In Green Hill Zone, looks like you're jumping through the platforms while enjoying the view of a beautiful waterfall over there in the distance. Of course, platforms, enemies, and stage props are stunning as well, with a mix of the more recent HD look and a bit of a cartoony feel to them. That's also the case for the playable characters (yes, there's more than Sonic).
And now we get to the first bit of this game that I think can be improved - the character models. Yes, they're in the same style as the enemies models but I feel Sonic isn't as detailed as, say, a buzzbomber. There's something a little off about all the other characters as well, although Sonic and Blaze are who I play as the most.
Apart from the character models, everything in this game is really beautiful, especially if you have a big screen to look at. Even the characters and enemy animations will make you smile. Sonic, as you expect, spin jumps, Tails flaps his tails, and spoiler spoils his spoilers… I won't spoil all the characters, although you can see them all in the store menu, even before you unlock them.
Tilt and touch
As you'd expect from an iOS game, Sonic Jump makes use of the system's accelerometer. And, although I've been known to complain about motion based controls in the past, it works really well this time. You simply tilt the device to make you character move left or right and touch the screen when you want Sonic and friends to jump, and again for a double jump. Easy as that! It does work really well and kudos to Hardlight for not making the control scheme a problem. It's simple, intuitive and just the way it should be for this kind of game.
You're probably find Sonic Jump to be fairly easy in the early acts of the first zone (Green Hill, what a shock!) but you'll find yourself struggling to get through the game as you progress. Badniks and level gimmicks are there to give you a hard time and stop you from collecting the much desired gold rings and getting an S rank in the end. There are also 3 red rings in each act, in the style of Sonic Colours and Sonic Generations. Collect them all and you'll get achievements.
Dr. Eggman will make two appearances per zone (instead of just one like in the first versions of the game). You'll have to jump and fight the fat scientist in both Acts 6 and 12. The boss fights don't vary that much from each other. Eggman is going up as you jump along and, at times, he'll try to hit you from below or, as you progress in the game, throw projectiles at you. When he tries to hit you directly, you just have to dodge and strike him back. Not much else to be said here. Of course, each zone's different types of platforms will make for a bigger or smaller challenge. I really hate those instantly destroying platforms!!!
This is another thing Hardlight could improve with a future update. More imaginative boss fights. I know Eggman doesn't seem so bright after all his defeats, but I'm sure he could come up with a few different machines or ways to kill Sonic and friends in boss fights. 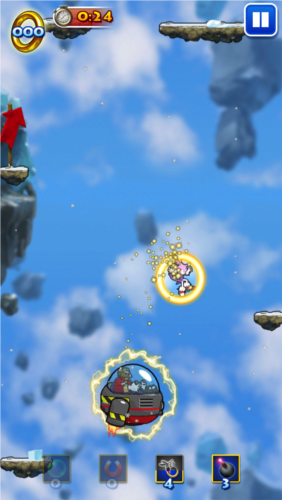 The game also features power-ups such as different shields with their respective effects on gameplay. This will make your experience much more rewarding and fun. Try all different power-ups and always keep a certain amount of them available for when the need comes. Especially the one that allows you to get back up if you fall - a safety net of sorts.
Game modes
You'll start the game by choosing one of the two available game modes - Story and Arcade. Story is, of course, the main game mode, letting you tackle each Zone and Act one at a time while trying to grab those red rings and score all S ranks. In Arcade mode, you get to chose one zone and play an endless game of Sonic Jump, until you fall, of course. Eggman will still be appearing from time to time and your goal here is to get as high as you can. Arcade mode may sound easy, but it can be very challenging, especially in the latter zones of the game. 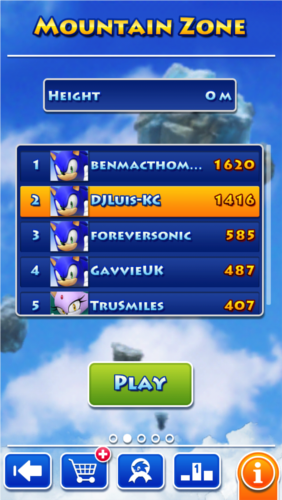 Overall, you can expect your fun with Sonic Jump to last for a long time. Especially if you're aiming for the highest scores on Arcade mode, or trying to get all S ranks in Story mode. Apart from that, you also have missions to accomplish, such as killing a given amount of badniks, jumping a certain amount of times or collecting a certain number of rings. As you clear the missions, you'll level up and more power-ups will become available, as well as characters.
The characters also provide for the game's variety, with each one having different abilities. Tails, for example, doesn't fall so fast, letting you correct your course before plunging to your death. Knuckles does a mean double jump, higher than Sonic's. And so on. No more spoilers!
Of course, you can get some of these rewards sooner by paying from them. Being a mobile game, Sonic Jump features in-app purchases, but they're not required to get the full experience. With patience and dedication, you can level up and improve your game without spending a single extra penny… or cent.
Sound Test
No matter how bad a Sonic game is, there is a golden rule that is never to be broken: The soundtrack is always amazing. Honestly, Sonic Jump started out by breaking this rule. The first versions of the app featured a bland soundtrack and that put me off playing the game more. Fortunately, Hardlight fixed this on later versions. Now, you have a bigger soundtrack with several tunes for each act playing randomly. I'm especially fond of the Blue Sky Zone soundtrack. The main theme of Sonic Jump also gets stuck in your head for some reason and I really like the boss theme. As for the sound effects, they're spot on. Each jump, badnik destroyed, ring collected, etc, features the correct sound and in most cases, you'll know them if you're a Sonic fan. Sadly, there's no Live and Learn or Metal Harbor 8-BIT versions! :P
Conclusion
Some say this is one of the best modern Sonic games to be released and, to an extent, they're right. Although it may be a spin-off, it certainly is a good one. Hardlight did very well and I'm curious to see what they have in store for us in future updates to the game. New zones and characters are to be expected, at least. 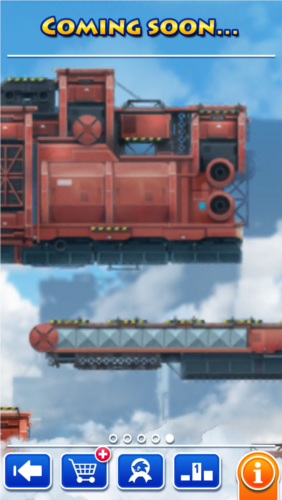 Apart from some minor issues, like the repetitive boss fights and my personal dislike of the playable character models, this is a must buy for all iOS device owners, even if they're not SEGA fans. This is far from a port of the original Sonic Jump. Hardlight did get carried away and we're happy for it. Keep them coming, guys!
Score: 4.5/5
15th March, 2013 - 14:14 GMT KC Article viewed 4869 times 0 Comments