Sonic is back and doing what he does best, or is he? In the twenty something years the blue blur has been with us, Sonic has taken many paths. Some have lead straight to our hearts and won us over instantly, others have missed the spring totally and fallen forever into a bottomless pit. Other times its taken a while for us to see the whole point and accept that the game we are playing is actually any good, Sonic Lost World is one of those games.

Developed by: Sonic Team
Published by: SEGA (NA)/Nintendo (Europe)
Released: 18th October 2013 (Europe)/29th October 2013 (NA)
Tested on: Wii U
Actually I think this game should have been called ‘Sonic Colours 2’ as there are a lot of similarities to Colours. The wisps are back and they have even brought us some new friends to play with, levels switch from 3D to 2D and back again in a familiar fashion, worlds are brightly coloured and happy tunes bop along as you progress.  Players of Nintendo’s Plumber will notice a massive nod toward the excellent ‘Super Mario Galaxy’ but of course being SEGA fans we would never admit to that, but it really adds a lot to the game. All in all a recipe for a good Sonic game, one in a flavour that most Sonic fans (who are a fussy lot) have enjoyed. However, the weak point of any recipe is the ingredients that you use. Get them wrong or in the wrong proportion and the whole thing is ruined.
As with all of my reviews I wont reveal too much so no need for spoiler alerts, so here is some plot background. As usual Sonic and Tails are having Eggman trouble. The old Doc has enlisted the help of six Zeti, native inhabitants of the hex world, well I say enlisted, more like forced as he has a special device that controls this tough bunch and brings them into line. Good job that he has control because just imagine the carnage that could ensue if he lost it?
The game starts in a similar way to most other Sonic games in a green and speedy land, a tutorial ensues but it’s not entirely evident unless you look down at the WiiU controller. If you don’t then you will start to get frustrated with the game very quickly as Sonic moves a lot differently than in his previous outings. For example he has two speeds, the faster achieved with a press of the shoulder button, but even with Sonic in top gear, he doesn’t feel that speedy, which is a bit of a shock, but this is a platformer after all, remember how things felt in Marble Zone in Sonic 1 after all that Green Hill rushing? It’s that sort of shock.
Next up is the double jump, yes it’s the staple of most platformers but in my opinion not needed in a Sonic game, but boy do you need it in THIS Sonic game as almost every place you need to get to requires that second stab of the jump button.
All of this seems a bit negative, the controls are a little fiddly and Sonics speed does seem a bit down but give it a chance and you will see there is a reason things have been done this way.
Parkour.
The noble French art of running away in style features as some new moves for Sonic, and he is going to need all the tricks he can lay his gloved hands on if he is to beat those deadly six Zeti and once again save the Pri… er, World. In addition to wisp power ups, speedy shoes and rings, our favourite hog can run up and along walls, shimmy up poles and trees all with silky smooth style and attitude. This is achieved with some (at first fiddly) button pushing, but after a while becomes second nature, and this sort of sums the game up, the more you play it the more you fall in love with it and really the better it gets. There are lots of things to discover and a lot to do other than just getting through the level, as collecting all those special red rings in each zone will award you with a chaos emerald, but strangely collecting 100 gold rings does not give an extra life. 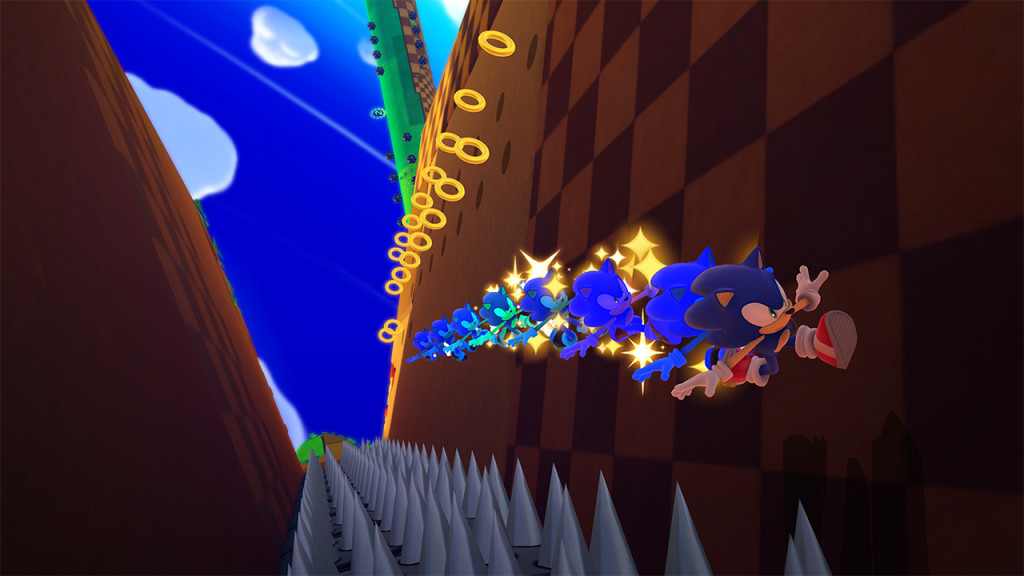 This is a game for all skill levels, challenging but not impossible to beat, if anything I felt the Boss battles a little to easy where the actual game levels could be tough and a bit confusing. Frozen Factory Zone 1 is a good example of this, as if you are not careful you come to a complete stop as there is no real indication where to go and you find yourself back at the start over and over again. There are lots of nice touches though, the in between level, open world section is great, with some fun mini games that give you nice bonus items, good ol’ Omochao is lurking about with some extra tasks to be done. You can even send a wisp off into the Internet, carrying an item to be used by another player, all of these little touches are great but there are some glaring omissions.
There is no music player, AGAIN. This is a personal gripe of mine, I love Sonic and his games and I love the music that accompanies the game so its only natural I would like to listen to it, so why on earth has this feature been removed? Another glaring omission, an omission that we begged Iizuka-san in person at the last two Summer of Sonic conventions was the inclusion of a Chao Garden. The free roam section between levels is a perfect place to put it and the nature of how the main game plays would be perfect for raising Chao, but no matter. Maybe Sonic Team will give us what we want next time. 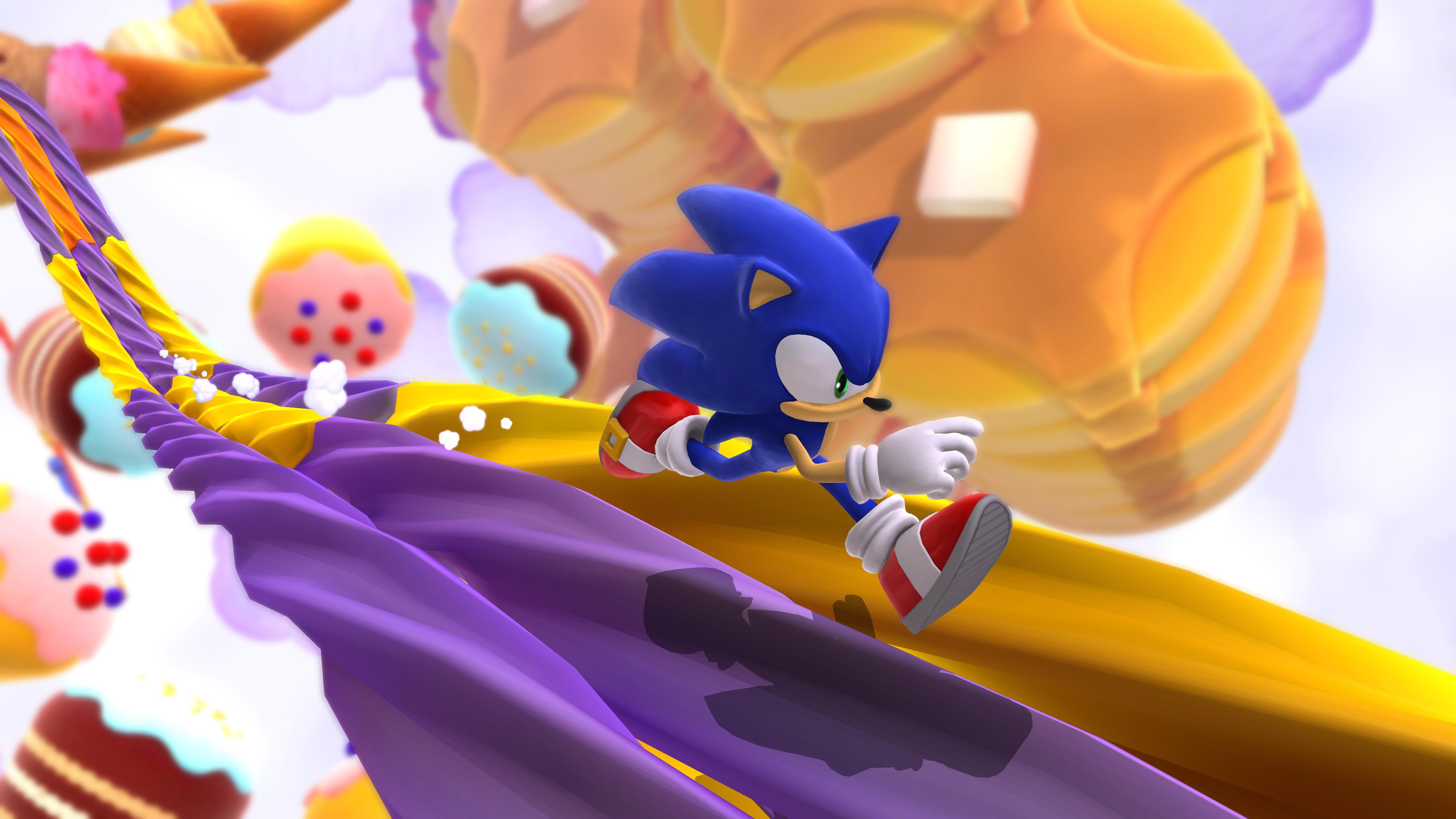 Sonic Lost World is a good game that gets better the more you play it. The designers have clearly thought about what they are doing, and the direction that Sonic games are moving in means that Sonic will have to do things differently. The controls are fine, the speed is fine and there is more than enough to do within the game. Purists will find things to pick at but there is not much that can be done about that. If there was a music player, Crush 40 soundtrack and Chao Garden then they would have hit the perfect Sonic game but even without these things the game is definitely top five.
1st November, 2013 - 18:48 GMT Page Article viewed 3988 times 0 Comments