The Kickstarter funded album is finally available and it includes 3 SEGA-related pieces. Before you rush off to buy the thing, read more about it and enjoy our exclusive interview with the guys behind the album. 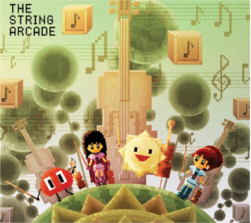 The String Arcade is a recording of video game music arranged for string quartet. It all came from the mind of composer Dren McDonald, who arranged 13 of the songs (4 of them his own compositions), mixed the recordings and worked with the musicians. Jason Poss arranged 4 of the songs and Tim Lindeen was the remote recording engineer.

McDonald also oversaw the Kickstarter campaign that made it all possible, last year, by collecting over $7,700. This first album features songs that cover a wide array of video game generations. From Galaga to TRON, from Zelda to Sonic, from Portal 2 to Minecraft, and even some mobile and Facebook games. And 3 of the tracks are SEGA-related: there's a beautiful Ecco the Dolphin piece, an amazing Sonic the Hedgehog 2 suite (that was played during this week's RadioSEGA's Top 40 Countdown) and a nod to arcade/Mega Drive classic Altered Beast.

If you haven’t yet listened to the full piece, go buy it from their Bandcamp page, put it on your preferred portable media player, sit back with your headphones on, relax and just enjoy the sheer brilliance. Of course, some tunes will sound more familiar than others depending on your gaming experience, but they all share that nostalgic feel and serve to further illustrate how video game music is of cultural significance.

Furthermore, 100% of the sales from the recording go to the Alameda Music Project, an after school, tuition-free music program to help kids acquire the taste for music. Great music to support a great cause!

You can buy The String Arcade album through their Bandcamp page here. There’s a limited edition (250 copies) available for $11.99, which includes 2 exclusive bonus tracks, and a digital album available for $10 with the regular 15 tracks set. Of course, you can also get it from iTunes, Google Play, Amazon and LOUDR.FM.

Want to know more about the project? Sure, check out their official website here. And, since we love to tell you guys more about SEGA-related projects, we have an interview exclusive to RadioSEGA and Caverns of Hope. Klaimen and I asked some questions and here are the answers straight from Dren McDonald and Jason Poss.

KC: Thanks for granting us this interview, Dren! Last year, you took to Kickstarter to get funding for an album of video game music played by a string quartet. What made you pursue that goal in the first place?

Dren: A few ideas converged at the same time, and it seemed like this might be a crowd sourcing-worthy idea. Since we were doing this both as a fundraiser and a fun creative project, Kickstarter seemed like a good option. Since I had lots of experience in releasing albums in the past from running my own label, I thought that this fact would help carry some weight with backers. And because we did the 'proof of concept' recording of the first 4 songs, we had something tangible to show to potential backers. While I was excited to raise money for the Alameda Music Project, the project wouldn't have got very far without a lot of enthusiasm, and as I worked on these arrangements, and started hearing Jason's arrangements I kept gaining more and more enthusiasm for finishing the whole thing.

KC: What influenced your choice of games and tracks to cover?

KC: The String Arcade album also supports a good cause. Can you explain what the Alameda Music Project is?

Dren: Alameda Music Project (alamedamusicproject.org) is an El Sistema-based after school music program, for kids aged K-5, studying strings, percussion and chorus. The full program begins this fall at a pilot school in Alameda, but the district is very excited about the possibilities of the program. The students will study music every day, after school, along with doing their homework, and playing in ensembles and individually. The El Sistema model really brings kids together socially and the by product of that is often that they are enthusiastic about performing the music and making it better.

KC: Now, about the SEGA covers you did. Were you and/or any other members of the quartet SEGA fans?

Dren: I certainly remember LOTS of late nights with my friends and the Sega Genesis. I had an NES at the time, and I remember when a close friend of mine got the Genesis we all just freaked out and played it any chance we could.

KC: Why did you choose those Sonic 2 tracks to cover? Was the decision based on personal preference or was it merely because they suited the project better?

Dren: I remember really enjoying the Sonic 2 soundtrack, and as I was choosing tracks for the project I started revisiting that soundtrack. Jason did that chart, and I just sent him a few links to songs that I thought might work, not thinking that he'd use all of them. But he used all of them! And he made it work together in an arrangement that I would have never come up with. I love that it starts with the big boss Robotnik song.

KC: What about Altered Beast? It usually doesn't get that much attention. Did any of you guys play the Arcade or console versions?

Dren: I played the crap out of the Genesis version of that game. I played it in arcades too, cuz I loved it, but mostly on the Genesis. I have it on my iPad and on one of those retro ps3 collections of sega games. Back when the Genesis came out, I just remember how much everyone was going nuts for that game… "Welcome to your doom!" 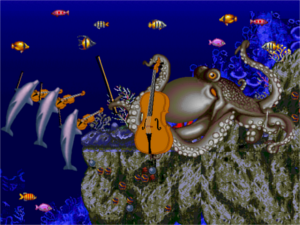 (Image by Klaimen of Caverns of Hope)

Klaimen: Ecco rarely gets covered in such projects, so I'm happy you dedicated a track to our favorite dolphin! What's your history with Ecco the Dolphin and what made you feature him on the String Arcade?

Dren: Along with some of these other Sega titles, Ecco left an impression on me. The only history I have with the game is from my Genesis days (which is a long time ago), but 4-5 years ago we found a Gameboy Advance at the local mall. My son, who was probably 3 or 4 years old at the time, pretty much claimed it to be his. And it had a Sega cartridge in it that had Ecco, Sonic Spinball and Golden Axe. My son didn't really 'get' Ecco, but as soon as he would put it on and start playing, the music immediately took me back and I was struck by the impact it had on me at the time.

Klaimen: You chose the 16-bit cartridge soundtrack over the Mega CD soundtrack. Personally I am very fond of this decision, it deserves to get more love. Did you go for the chiptunes due to personal favour or do you have different reasons?

Klaimen: The track starts off with the Time Travel melody and moves right to the Open Ocean stage music. This felt like a perfect transition. How did you decide the songs for the track? Are there any others you wished to cover but had to leave out?

Jason: Dren had sent me the Game Boy Advance/Time Travel theme, Open Ocean, and the Opening Theme from the Sega Mega Drive version. I knew Dren was more familiar with Ecco games than I, so I stuck with what he provided. I also watched gameplay videos on the internet to see if there was a general mood that carried across all the games. I noticed that all the Ecco games had a beautiful loneliness to them, so I ran with that idea.

I think my original plan was to begin with the Opening Theme. However as the arrangement came together I realized that musically it felt better to start with the GBA/Time Travel music. Since I wasn't trying to tell a story, the decisions about transitioning from one piece to another were based on creating the right mood and giving an interesting ebb and flow to the music.

Klaimen: I think one of the biggest surprises are the dolphin/seagull noises you make with the violin later, during the main theme. It's brilliant! Just how did you come up with that idea?

Jason: That's a fairly well known cello technique that is commonly called the "seagull effect". I figured people would hear it as a seagull, but in the Ecco context may also hear it as a dolphin vocalization.

I almost didn't put it in the arrangement because I thought it might be too campy. However as the piece progressed, I realized that it could work at that point in the music if given the right background. I was actually imagining Ecco passing near a lonely seashore with waves in the distance, so it seemed appropriate. It comes back again at the end as I imagined Ecco disappearing into the ocean while we are left on the shore with no idea where he was going next.

Klaimen: Lastly I'd like to know what's your favorite moment in any Ecco game. I really hope that Ecco will also get featured in the next String Arcade - or maybe he will get a whole dedicated EP? :)

Dren: It's hard to pin down a specific moment for me, I'm afraid. I think what drew me back to thinking about the game was that moment hearing the GBA version of the music and being surprised at the effect that it had. I knew that there was going to be a strong theme of melancholy and/or sadness, even loneliness thru the course of the record (which seems odd for an album of video game music, right?)and maybe this is my favorite part of Ecco… the solitude of Ecco, determined to keep exploring. There was just something beautiful about a game character like that. A dedicated EP? I have no idea… I hope that people like this record and we'll go from there!

KC: As a final question, are there any plans at the moment to make a second album? If so, would Kickstarter be the chosen vehicle to get funding?

Dren: Like I say, I want to get this one launched, and see how it does. Considering that Alameda Music Project will probably always need more help, and that we had an amazing time making this record, the chances are good. Considering that Kickstarter worked so well for us, I don't know why we wouldn't use it again.

KC: Thanks for the opportunity to cover this amazing project! We hope The String Arcade all the best! Be sure to let us know when there's more SEGA music in the making.